To learn some basic facts about St Brigid.

To distinguish the historical from the fictional information.

To explore some of the legends associated with St Brigid.

To develop an awareness of St Brigid’s personality.

Do you know of anyone named Bridget, Brigid, Briege or Bridie?

Biography St. Brigid was born in AD 450 in Faughart, near Dundalk in Co. Louth. Her father was a pagan chieftain of Leinster and her mother was a Christian. It was thought that Brigid’s mother was born in Portugal but was kidnapped by Irish pirates and brought to Ireland to work as a slave, just like St. Patrick was. Brigid’s father named her after one of the most powerful goddesses of the pagan religion - the god of fire. He kept Brigid and her mother as slaves even though he was a wealthy man. Brigid spent her earlier life cooking, cleaning, washing and feeding the animals on her father’s farm. She lived during the time of St.Patrick and was inspired by his preachings and she became a Christian. When Brigid turned eighteen, she stopped working for her father. Brigid’s father wanted her to find a husband but Brigid had decided that she would spend her life working for God by looking after poor, sick and elderly people.
Brigid’s charity angered her father because he thought she was being too generous to the poor. When she finally gave away his sword to a leper, her father realised that she would be best suited to the religious life. Brigid finally got her wish and entered the convent. She made her vows to dedicate her life to God. News of Brigid’s good works spread and soon many young girls from all over the country joined her in the convent. Brigid founded many convents all over Ireland; the most famous one was in Co. Kildare. It is said that this convent was built beside an oak tree where the town of Kildare now stands. Around 470 A.D. she also founded a double monastery, for nuns and monks, in Kildare. The Abbey of Kildare became one of the most prestigious monasteries in Ireland, and was famous throughout Christian Europe. St. Brigid also founded a school of art, including metal work and illumination, over which St. Conleth presided. In the scriptorium of the monastery, the famous illuminated manuscript the Book of Kildare was created. 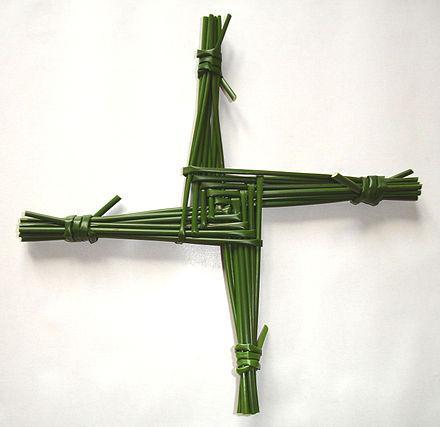 Making a St. Brigid’s cross is one of the traditional rituals in Ireland to celebrate the beginning of early spring, 1st February. The crosses are made of rushes that are pulled rather than cut. They are hung by the door to protect the house from fire and evil. According to tradition a new cross is made each St Brigid's Day. Some people believe that keeping a cross in the ceiling or roof is a good way to preserve the home from fire which was always a major threat in houses with thatch and wood roofs. St. Brigid and her cross are linked together by the story that she wove this form of cross at the death bed of either her father or a pagan lord, who upon hearing what the cross meant, asked to be baptised.
One version goes as follows: “A pagan chieftain from the neighbourhood of Kildare was dying. Christians in his household sent for Brigid to talk to him about Christ. Brigid sat down at his bedside and began consoling him. As was customary, the dirt floor was strewn with rushes both for warmth and cleanliness. Brigid stooped down and started to weave them into a cross, fastening the points together. The sick man asked what she was doing. She began to explain the cross, and  he questioned her with growing interest. Through her weaving, he converted and was baptised. Since then the cross of rushes has been a popular tradition in Ireland.” 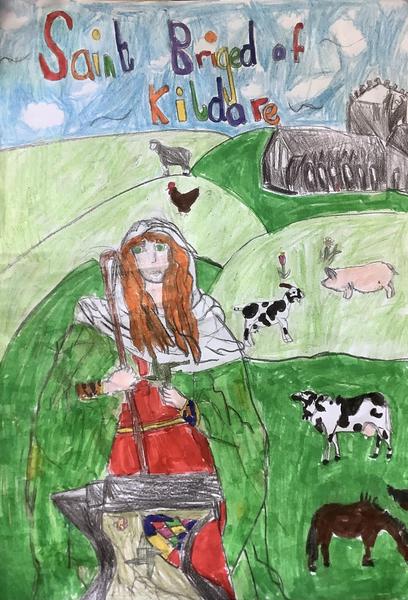 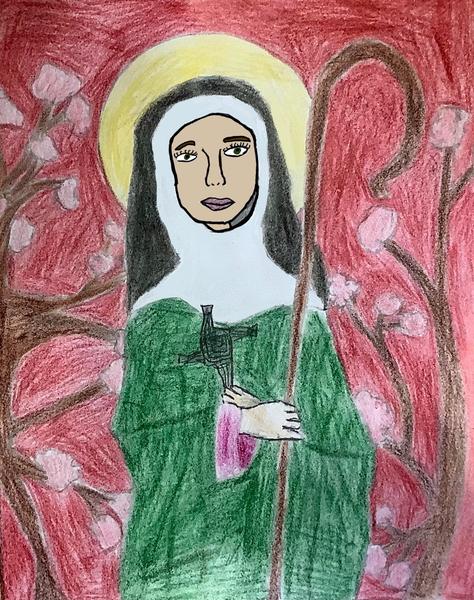 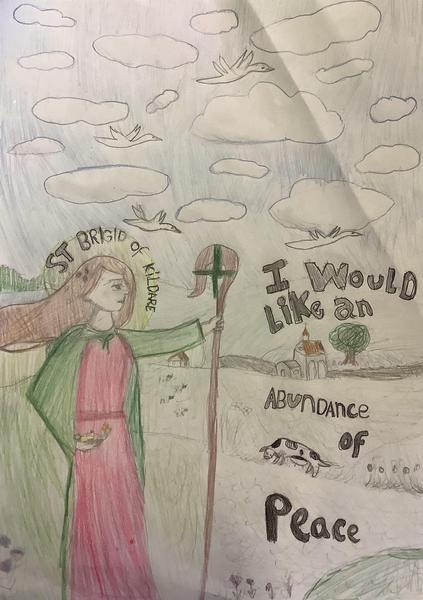 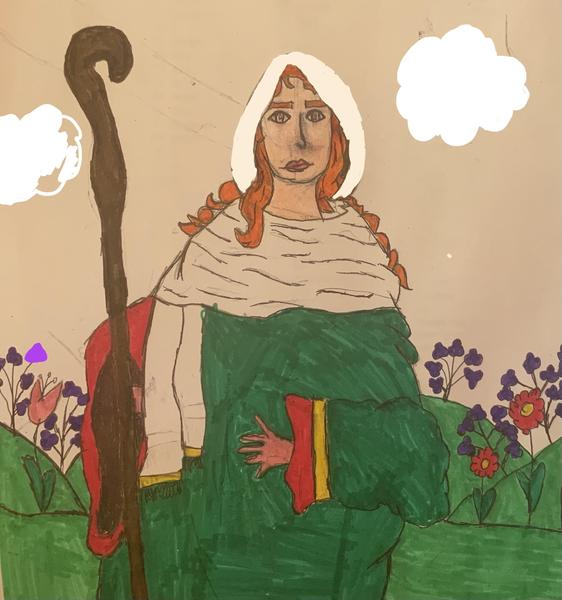 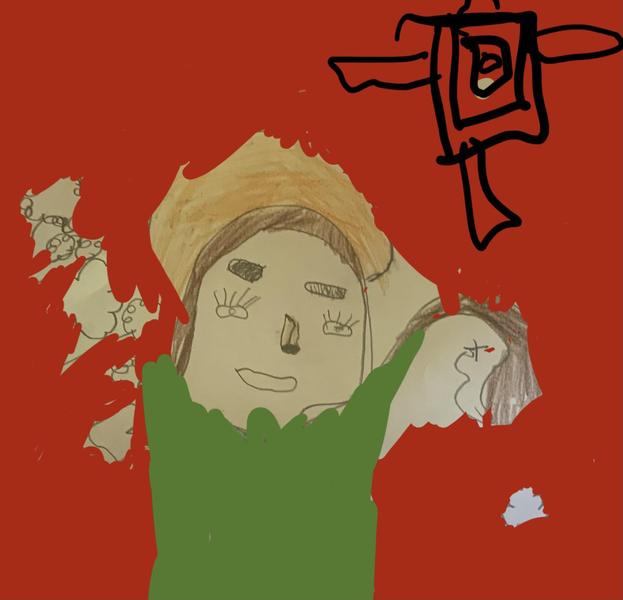 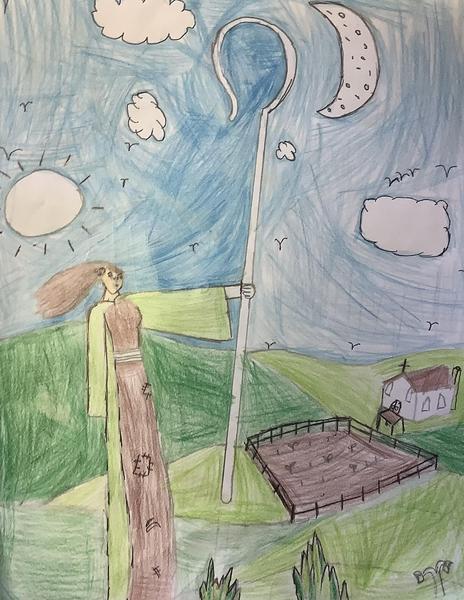 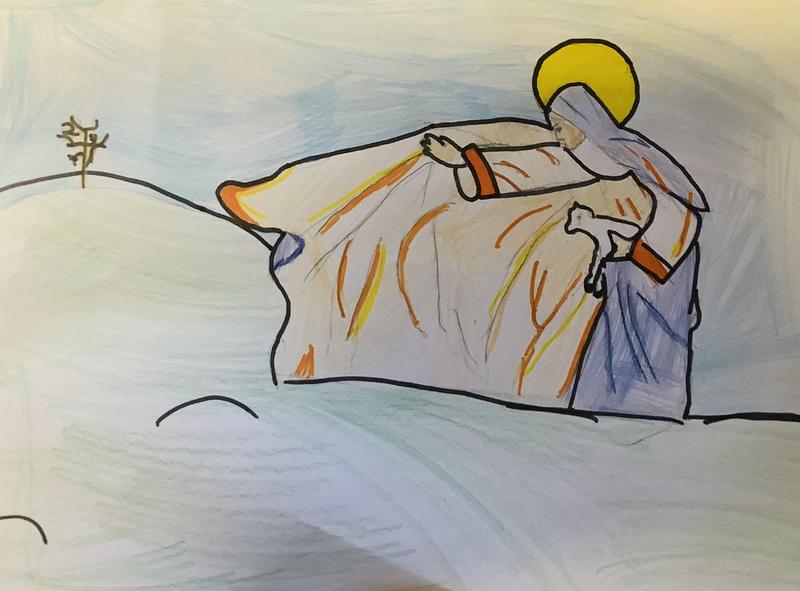 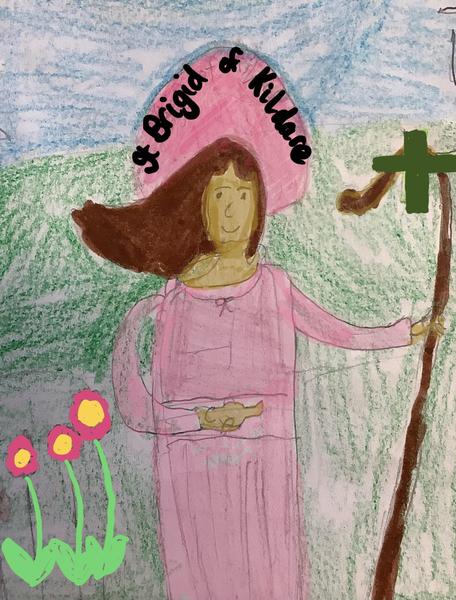 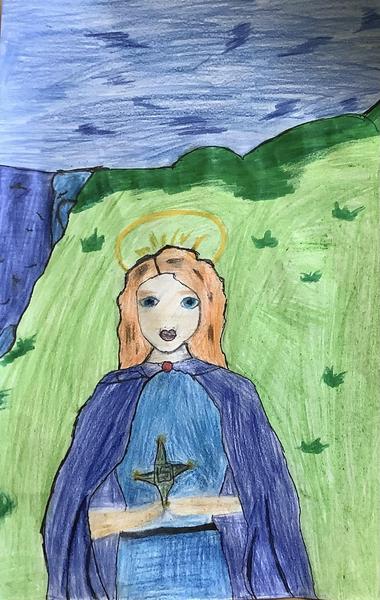 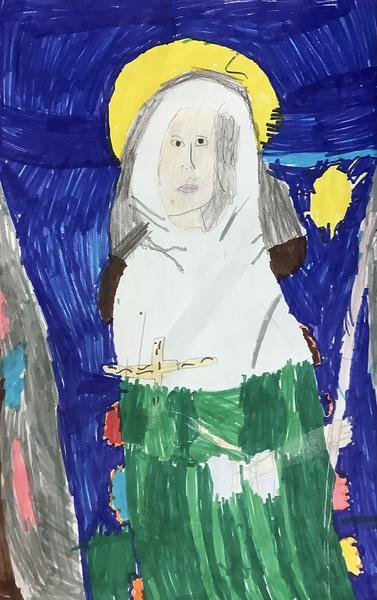 St. Brigid died in AD 525 at the age of 75 and was buried in a tomb before the High Altar of her Abbey church. After some time, her remains were exhumed and transferred to Downpatrick to rest with the two other patron saints of Ireland, St. Patrick and St. Columcille. St. Brigid is the female patron saint of Ireland. She is also known as `Muire na nGael` or Mary of the Gael which means `Our Lady of the Irish`. Her feast day is the 1st of February which is the first day of Spring in Ireland.